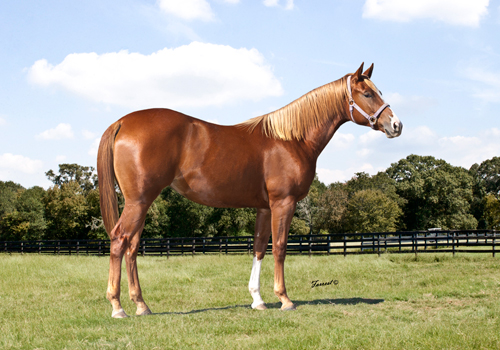 Luna is a 2016 futurity horse who is currently being hauled to all the major futurities by Ryann Pedone. She is a flashy filly with a beautiful frame and one of the nicest movers on the ranch.

Luna is sired by the Dash ta Fame son, Woodbridge, who has progeny earnings of $1.73 million on the track and $118,142 in the arena. He is the sire of Futurity champion Wood B Smokinfame, who is now finding success in the rodeo arena.

Luna is out of Sol Olena, who Kristin Weaver-Brown raised and trained. She won the American West Regional Futurity before being retired after colic surgery. Sol was sired by Sun Frost, who has sired NFR qualifiers French Flash Hawk and Frenchman's Hayday, as well as leading sire Frenchman's Guy. Sun Frost has progeny earnings of $1.3 million in barrel racing.

Sold to the Jones family of Wayne, Oklahoma