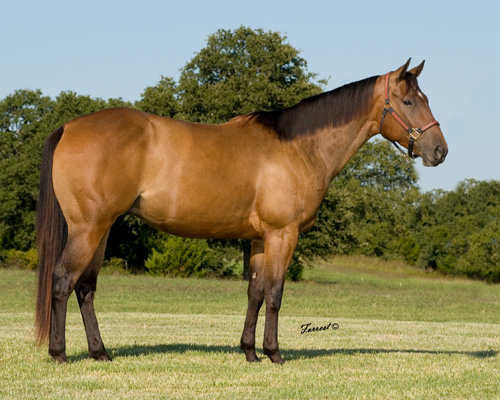 Coffee Bean is running about a second off of NFR horses in Texas and is entered in the Juvenile Futurity. He was started a little later so we are expecting him to peak in the spring futurities. He has a lot of talent and can really run. Coffee Bean is broke and also laid back- anyone can ride him as he is good with lots of different riders. Very forgiving and picks up everything very quickly. The first payment for Ft. Smith has been paid and he is paid in full for Future Fortunes as well.

Coffee Bean is out of Miss Vicky Bugs, SI 79 and a race winner. Miss Vicky Bugs had produced money earners in barrel racing and one ROM earner on the track. She is a daughter of Bugs Alive in 75, the All-Time leading maternal grandsire of barrel horses as well as a multiple NFR producer.