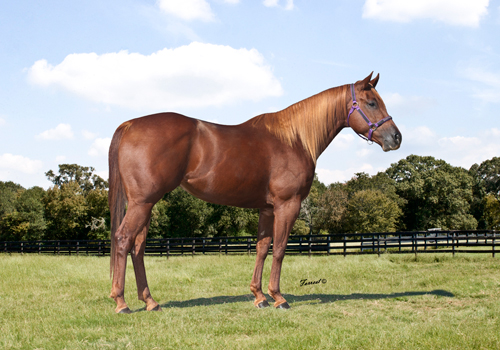 Wilma was purchased from Ryan Pedonne and Josh Harvey to run the the 2015 futurities. We bought her after liking our other BHR Frenchies Socks mare, Bratwhereyoursocks. Wilma looks just like her half-sister and we hope that she is as successful as Brat turned out to be.

Wilma is sired by the young standout stallion, BHR Frenchies Socks. In his first few years of standing at stud, he has already produced the earners of $107,264 in barrel racing competition. He has sired Futurity Champion Kiss This Guy, BFA Juvenile finalists Go Too Guy, Bratwheresyoursocks, and BFA Futurity finalists Joyce's Guy and Holland Guy.

Wilma is out of Red Flashin Money, who has Equistat earnings of $2,248.01 in barrel racing competition. Wilma's full sibling, French Money Maker, is a barrel racing money earner. Red Flashin Money is sired by 5-time leading Barrel Racing sire, On the Money Red. He has progeny earnings of $2.8+ million in barrel racing and is the sire of NFR Qualifiers Speed Money and Flowers and Money, BFA Futurity Champion SR Red Ryder, and AQHA World Champion barrel horse Designer Red.